I did not set out to write a series of Advent reflections. I write only when I am inspired to do so - and when I get a clear message that somehow something in my heart must be conveyed...

And while I know that not everyone that reads this blog comes from the same spiritual or philosophical background - or even the same interests or convictions - I try to convey messages and values that are both timeless and universal, and accessible to all. And so today, I write of peace, because in the last few days, so many messages received have reminded me of its importance...

As I mentioned a few days ago, I have been reading the daily reflections on a a site called "Following the Star," and this weeks entries focus on peace.

Forty-two years ago today, Thomas Merton, perhaps the most prolific spiritual writer of all time - and most certainly of the 20th century - died accidentally, while attending a monastic conference in Thailand. Merton was a Trappist Monk, an activist, a poet, a theologian - and many countless other things as well. His writings continue to be published even to this day, for he left behind a vast corpus of inspirational works and scholarly treatises.

Merton died the same year that Robert F. Kennedy did, and Martin Luther King, Jr. as well. And though he was cloistered, through the eloquent power of his pen, he managed to affect many, in addition to corresponding with the great minds of his time - political and religious figures alike - such as Thich Nhat Hanh, Dorothy Day, and a legion of others. He died during the height of the Vietnam War, and was an outspoken critic of the war and a crusader for peace.

Elie Wiesel once said that "indifference...is the epitome of evil." For not caring about others, is what leads to it. Instead of being indifferent, we must reach out to others in need - starting with those around us.

The devotional site, "Following the Star," posted the following this week:

"Some might think it foolish to speak of peace these days. But for people of faith, the promise remains. In the midst of war, division - and simple rude behavior, we are still committed to a much different vision. Set aside the time for something more...The peace that is coming and that has come."

Today, the 2010 Nobel Peace Prize was awarded in absentia to Chinese dissident, Liu Xiaobo. One lone, empty chair, drew attention to his incarceration, and more than anything, loudly screamed and proclaimed to all of us willing to hear, that peace remains absent in many places on this earth.

This season, let us all not only meditate on the meaning and necessity of peace, but let us work for it - and commit to reflecting it more deeply, in our words and actions - in our families and workplaces - indeed, in all areas and aspects of our lives. For truly, we can only change the world, one person at a time. This season - seek peace. Embody peace. Offer peace.

As a liturgical song I once sang so simply states:

"Let there be peace on earth,
and let it begin with me."

Here are a series of quotes I ran across this week as well:

"Be so drunk with the love of God
that you will know nothing but God;
and give love to all."
~ Sri Daya Mata

"If you wish to experience peace,
provide peace for another."
~ The Dalai Lama

"Peace is not the absence of war,
it is a virtue, a state of mind,
a disposition for benevolence,
confidence, and justice."
~ Spinoza 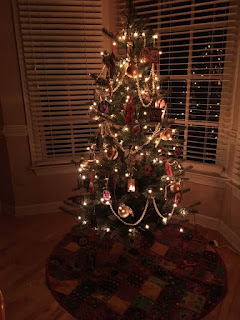 September 27, 2012
I was given a gift today. It was the gift of a blue butterfly... After a lazy morning, sleeping in and moving slowly, I went for a walk, listening to Andy Williams tunes, like the song - "Try to Remember that kind of September..." The day was warm, and beautiful - and I thought to myself, I do live that kind of September where life is now mellow..." Half way through my walk, a blue butterfly flew almost directly in front of me and then perched itself on the branch of a Leyland Cypress on the edge of the path. It spread its wings magnificently, and stayed there - unwavering, for what seemed to be an eternity... I looked at it, only inches from me, and was surprised it did not move, and seemed not afraid of me in anyway. I was determined not to be the one who moved first. Almost immediately, I felt my heart flooded with incredible love for this creature - for all creatures - as I thought of loved ones in my life. In that moment, time stood still and I felt a deep
Read more

January 29, 2012
Recently, I picked up the book Living in Gratitude: A Journey That Will Change Your Life , by Angeles Arrien . Marianne Williamson , one of my favorite authors, wrote the Forward. This is a practical book designed to enable you to cultivate the practice of gratitude throughout the year. Arrien begins her book with this often quoted pearl of wisdom by Meister Eckhart : "If the only prayer you say in your whole life is thank you, that would suffice." The introduction contains such rich and wonderful material that fed my themes and comments in my classes this past week. If you wish to increase your gratefulness a thousand-fold - or even just ten times, this is the book for you. Let me end by sharing some of the wonderful insights from the Introduction to this book... "Every language in the world has a way of saying 'thank you...' Gratitude crosses all boundaries... Gratitude is essentially the recognition of the unearned increments of value in one's ex
Read more

August 01, 2009
I was sent a couple of poems by Rumi recently, and I wish to share them here. May you find inspiration in them for a glorious weekend! The Lord is in Me The Lord is in me, and the Lord is in you, As life is hidden in every seed. So rubble your pride, my friend, And look for Him within you. When I sit in the heart of His world A million suns blaze with light, A burning blue sea spreads across the sky, Life's turmoil falls quiet, All the stains of suffering wash away. Listen to the unstruck bells and drums! Love is here; plunge into its rapture! Rains pour down without water; Rivers are streams of light. How could I ever express How blessed I feel To revel in such vast ecstasy In my own body? This is the music Of soul and soul meeting. Of the forgetting of all grief. This is the music That transcends all coming and going. Love Said to Me I worship the moon. Tell me of the soft glow of a candle light and the sweetness of my moon. Don't talk about
Read more